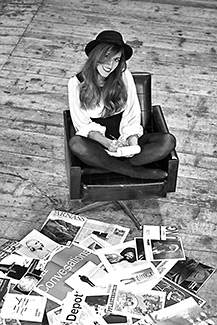 Born in Prague, Czech Republic, Katerina Kombercova is a Cultural Promoter, PR Specialist and a free-lance writer. Katerina traveled to distant corners of the world before making Vienna, Austria, birthplace of her grandfather, her second home.

She belongs to the so-called "generation of Husak's children", which has partially shaped her thinking and being. On the day that the Velvet Revolution brought down the communist regime, she was only 10 years old. Katerina witnessed a unique non-violent revolution in her country, and the indescribable euphoria that followed. These events placed the "great European" Vaclav Havel at the forefront with songs by Marta Kubisova and slogans like Truth and Love Must Prevail Over Lies and Hatred giving her the impetus to subsequently study International Relations and Human Rights in Vienna.

Katerina's interests have always lay in art, media, and culture. She studied Art History at the University of Vienna, and holds a Master’s Degree of Art in Communications and Journalism as well as English studies. Always searching for challenges and inspiration, she gained experience on independent projects in Austria, before travelling to work in the UK with the award-winning advertising agency Ogilvy PR London, supporting the Broadcast and Digital team as a Media Relations Manager for Germany.

For the past 10 years Katerina Kombercova has been working as a freelance arts writer, editor and PR Specialist. She has taken up promoting several cultural and musical groups in Central Europe. She strives to promote established and emerging artists abroad and more generally to facilitate cultural exchange, in particular between Austria and the Czech Republic, two neighbouring countries that share many things in common. Katerina speaks Czech, German, and English fluently.